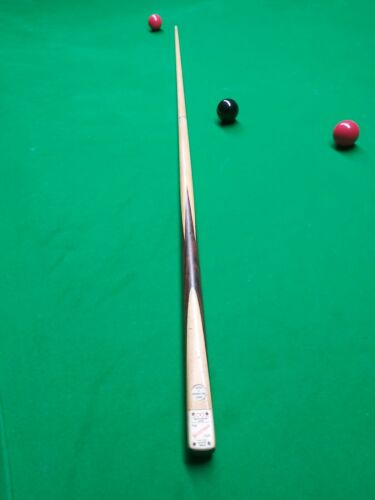 Click here to see similar items on eBay, and to buy.

history    :    (Info below kindly provided by Peter Ainsworth)
The beginnings of the firm are rather tenuous. In 1909 George Nelson (snr) was the Yorkshire Professional Billiards champion and at that time acted as representative for E. J. Riley, based in Accrington. He was made redundant from this job at the outbreak of War in 1914, but it seems to have been his lead into the trade, as he and his son, George Nelson (Jnr) were supplying billiard table cloth just after the War in the 1920s.This business gradually developed into other requisites (balls and cues) and by 1935 he was producing billiard tables. By the end of the 1930s they were well established as billiard table makers, trading as George Nelson (Billiards) Ltd- from 74 Vicar Lane, Leeds. Now, around the same time, Willie Smith was also putting his name to billiard tables which were produced at 13 Greek Street, also in Leeds. This company seems to have been fairly short-lived as the two businesses amalgamated as “Willie Smith and George Nelson Ltd” in 1940.This new company operated from Lower Headrow House, The Headrow, Leeds 1. Apparently, Willie Smith and George Nelson (snr) operated this company as “partners.” By the 1950s, Peter Nelson, George’s son, was running the company and Willie Smith sold his interest at this time (1953), although it continued to trade with his name. George Nelson (snr), who had retired from the business, died in December 1956, aged 79. In 1979 the company name was abbreviated to “Smith & Nelson Ltd” with the office and sales shop address given as Lower Headrow House, Bramley’s Yard, The Headrow Leeds 1. Workshops and Showroom at 14 Armley Road.Peter Nelson died rather suddenly in 1981 aged 67, although the company survived and was still trading in 1989 when their advertised address was 70 North Street, Leeds LS2 7PN.

Click here to buy, and to see similar items on eBay

Similar items:
Sorted by relevance. Sort by Price
Items 1 to

Ads on this site

Many of the links on this site are affiliate links. Please read the ads page for more information.

This website uses cookies to improve your experience while you navigate through the website. Out of these cookies, the cookies that are categorized as necessary are stored on your browser as they are essential for the working of basic functionalities of the website. We also use third-party cookies that help us analyze and understand how you use this website. These cookies will be stored in your browser only with your consent. You also have the option to opt-out of these cookies. But opting out of some of these cookies may have an effect on your browsing experience.
Necessary Always Enabled
Necessary cookies are absolutely essential for the website to function properly. This category only includes cookies that ensures basic functionalities and security features of the website. These cookies do not store any personal information.
Non-necessary
Any cookies that may not be particularly necessary for the website to function and is used specifically to collect user personal data via analytics, ads, other embedded contents are termed as non-necessary cookies. It is mandatory to procure user consent prior to running these cookies on your website.
SAVE & ACCEPT